25 Stories of Image Seen for Miles and Viewed by Millions

When the NBA All-star game comes to town, the biggest names in the sporting and celebrity worlds collide, creating an atmosphere like no other. In preparation for the 2017 All-star game in New Orleans, the iconic Benson Tower was chosen to be the graphic showpiece for the weekend’s events.

Benson Tower (formerly Dominion Tower and the CNG Tower) is a 26-store, 406-feet-tall skyscraper located in the central business district of downtown New Orleans. Visible from miles in most directions, the surfaces of this office building were chosen to carry the message of the NBA and its marketing partners.

This All-star game was chosen as a platform to make a statement about “equality”. The game was originally scheduled to be played in Charlotte, North Carolina, until it was moved to New Orleans due to policies that some perceived as “controversial”. Nike chose to enter the conversation, using the face of NBA star, Anthony Davis, and the message “Equality” to create graphics more than 20 stories in height. The image was in place during all of the All-star weekend celebration and was seen by millions, either in-person or on television.

Vision Graphics was proud to be selected as the production partner for this project. Vision Graphics has a long history and strong reputation for producing and implementing XXL graphics and decorating for events that are seen on a global scale.

In this job, Vision Graphic covered more than 67,000 square feet of brick, mortar and windows, creating a seamless graphic that performed perfectly throughout the event. The amount of printed material totaled more than 3 miles of vinyl and window perf.

Watch the video by Nike and see the photos below. And, then, when you need a graphic of any shape or size, contact us to receive the same expertise and guidance. 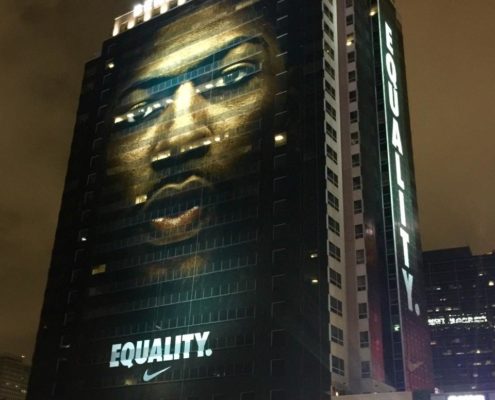 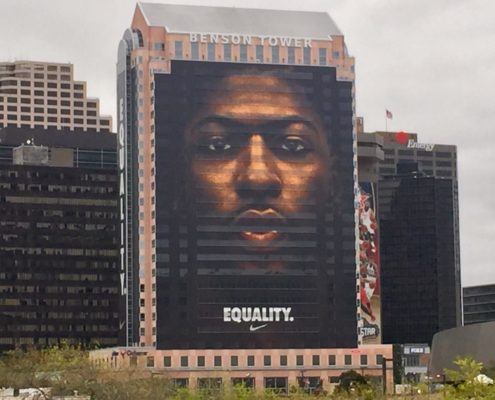 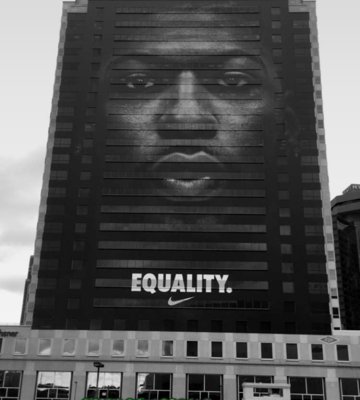 The Gateway – Tour of North Garage Graphics
Scroll to top